I'm joining in on the Sunday Showcase over at "Under The Table And Dreaming."
I'll be highlighting my mom's Bridal Shower post. Check it out here:

There were 13 total in attendance. The majority of attendees played up the theme and arrived in hats and some were wearing gloves.  It was a wonderful, intimate, elegant time spent among family and some very close friends.  There was a lot of laughter and quite a few tears.  My Mom will be 65 in May and will be retiring.  To keep the budget reasonable, they opted for a very small wedding.

My mom chose teal (any variation of the color) for her wedding color.  I am the Matron-of-Honor and my daughter, along with my nieces will be part of the bridal party. My son and nephew, will stand up with Don, along with his best man. She decided against having us all wear the same thing, since it is a small wedding.  We just found dresses in varying shades of teal.  She will be wearing a dove grey ankle length dress, with a white lace jacket.

I wanted to share some photos from the shower.  I chose the teal green as the accent color for the shower, but tried to keep everything else neutral, or white, actually.   I used the teal in the ribbons for the chairs, the runners and used the teal blue mason jars. 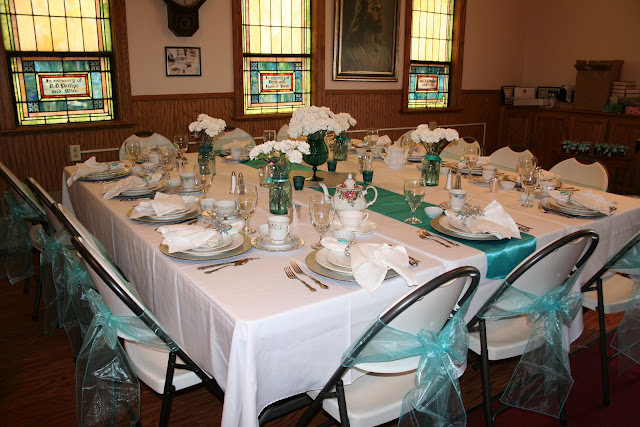 Since it was a small shower, I wanted to use all "real" china and glassware.  I don't have a closeup pic of a place setting, but I know that Don took some, so when I get copies of his pictures, I'll throw one in of a closeup.

Each place setting consisted of a silver charger, a white plate, white salad plate, linen napkin with beaded napkin ring, glass water goblet, and a three-piece tea cup set (cup, saucer, dessert plate).  Each napkin had a teal lollipop tucked into it. Here is a little bit of a closer peek: The centerpiece consisted of an teal vase that I found at Goodwill for $2.00.  We kept it simple with white carnations in all the mason jars and the centerpiece.  There were mercury glass votives scattered all around, also.

I also tucked a hummingbird pick into each mason jar, as hummingbirds hold a special meaning for my mom and myself.  My Dad LOVED hummingbirds, so it was a small reminder of him.  (He passed away from lung cancer 10 years ago.  You can read more about that here.)  You can see a little pink hummer in this picture: My daughter, cousin and aunt all helped with the food, preparation and setting up.  Actually, my mom ended up helping us set up, too, as it's next to impossible for her to sit still and NOT help.  She knew about the shower ahead of time, so no surprises were ruined.

Just a few more pictures of the food... 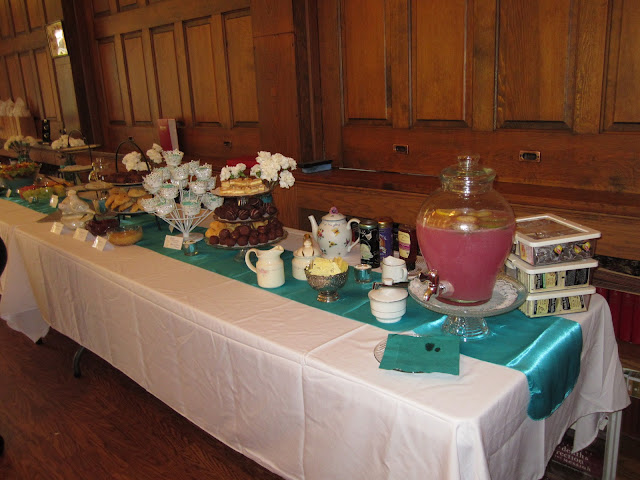 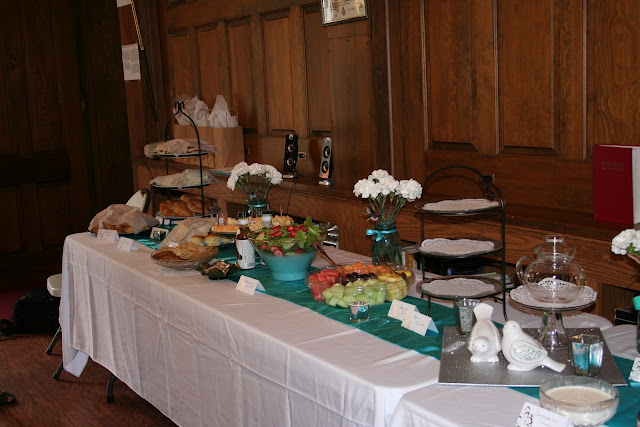 We played games and all the prizes were tea related.  I had harp music playing in the background on my ipod and speaker system. 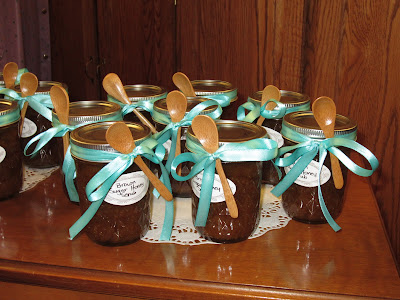 The favors were homemade brown sugar honey scrub that my daughter and I made and put into small mason jars.  We tied them with ribbon and added a small wooden scoop.  You can find that recipe here.  I tried stamping the name onto one of Martha Stewarts new Avery labels from Staples, but the ink ran so bad, that the words were indistinguishable. (Wow, that's a long word.) So I used the labels that came with the jars...very handy since it was last minute and I had no plan B. 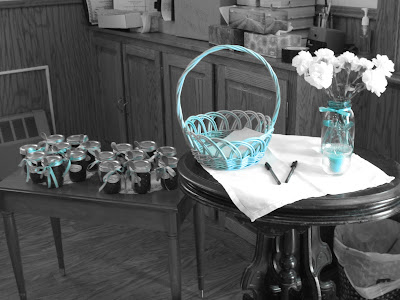 This is a picture of the favor table where I've isolated only the blue and made everything else black and white.  My new Canon Elph 300 does that. It's AWESOME!

Here is a picture of the main table using this technique: 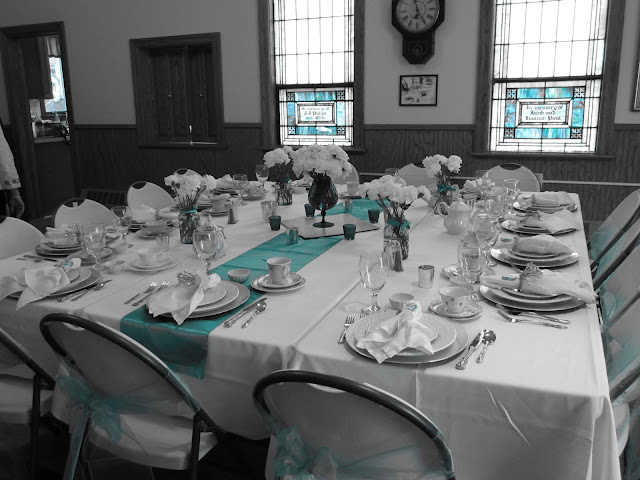 I love how it picks up the blue in the stained-glass windows.
I shared my favorite picture in the sneak peek post here... but here is my second favorite: 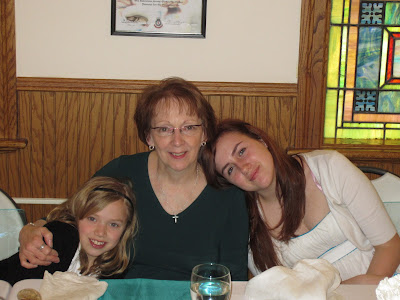 My Mom, with her youngest and oldest grandchildren.
My niece is the younger one, my daughter is the 17 year old.
As far as supplies for the shower, the only things we had to buy were the tablecloths, which are washable and will be used for the sit down dinner following the wedding, the table runners and the chair ribbons.  I got all three at "Smarty Had A Party".  Very, very reasonable and great selections!

I already owned all the china, silverware, goblets, napkins, tiers, serveware...well, everything.  I started collecting tea cups and saucers years ago.  The goblets I bought at Marshalls (Libbey-12 to a box). The plates are 10 Strawberry Street "Havana Weave" pattern.

The flowers we ordered from Potomac Flowers. Again, very reasonable for 150 carnation stems.  I had to bring everything from Maryland to Pennsylvania, so having the flowers delivered the day before the shower to my mom's house was a HUGE bonus. We're doing the same thing again for the wedding. We'll be reusing the runners, chair ribbons and mason jars as decorations for the dinner.  It's being held at the church, too, and is again, very small.  The meal will be catered, but it's not a huge, traditional reception.


Thank you for spending the time with me, while I reminisced about the shower.
Posted by Brenda at 12:03 AM 4 comments: